Notaker calls the Koocboec “basically a translation” of the Opera. However, this is hardly a correct assessment. In contrast to Diego Granado Maldonado, who in his Libro de cozina (1599) translated large sections of Scappi’s Italian culinary masterwork in Catalan without any editing, the Koocboec is all but, as we will show, a literal translation of the Opera inDutch.
Notaker, who is Norwegian and only possesses a passing knowledge of Dutch, was the first to discover the similarities between these two cookery-books. No historian from the Low Countries noticed these similarities before him. This may seem strange, as the similarities between these two cookery-books are fairly obvious once you compare them. We can only surmise that the lack of knowledge of Scappi’s Opera in the Low Countries lies at the root of this glaring oversight. When Henri Notaker mentioned to us the similarities he had found, it was as big a surprise to us as to our Belgian and Dutch colleagues who are working in the same field. We had never seen a copy of the Opera. As far as we know, only the University Library in Leiden has a copy in its collection; no other library in the Benelux possesses even a facsimile edition. It may seem strange to readers that there is only one copy (original or in facsimile), at least to our knowledge, of this important renaissance work in any library in The Netherlands or Belgium. We ourselves had to procure a copy from the antiquariat of Hans U. Weiss in Zürich1 of the facsimile published in 1981 by Arnaldo Forni Editore.
After a detailed analysis of both works, we found the following matches: 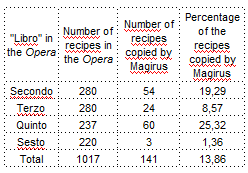 The Koocboec contains 170 recipes in total and is a much smaller work than the Opera or even the Libro de cozina by Maldonado. More than eighty percent of the recipes in the Koocboec are borrowed from the Opera. Magirus copied a almost fourteen percent of the recipes of the Opera (141 of 1017 recipes). He copied most from books five and two of the Opera, somewhat less from book three and almost nothing from book six. He copied nothing from the first and fourth books.